Here’s my story in a short and a long version.

oh and a short dutch version at the bottom!

at  the jazz vocal department at the Conservatory of Amsterdam.

She sings and writes music rooted in the Jazz and Soul tradition.

on it mainly originals in a contemporary jazz style.

The music was adventurous and intellectual and full of energy.

Throughout the years she gave concerts with duo’s, ( big-) bands,

Besides performing and writing she coaches, since ’88,  talents from all over the world

‘The questions I always ask myself and my students :

What is your true passion in a song,  in your voice, in playing with your fellow musicians,

and how do you share that passion with your audience.

Over the years she developed a more ‘from the gut’ style

of writing, singing and performing.

As you can hear on her album that was released in  2010: ‘the SOULSILLY Xperience’.

And the newest album released in 2018, a mix of Soul and Folk: SOULSILLY TALES.

Rehearsing bands, music instruments and wires all over the place,

the stage, the smell of the red velvet curtains, numerous concerts,

great memories of my childhood, of the club ran by my parents.

There and then I breathed in and out the live atmosphere of music and theatre.

Back then it was called ‘Improvised music’ , main subject singing,

at the Conservatory of Amsterdam.

It was fertile soil for my musical and personal growth.

All about being adventurous and renewing with

Here I also started writing music: my inner need to create and express.

thank you for being so inspiring!

My very first band was, YES, a soulband.

From then on I sang jazz, soul, pop and blues.

In various formations from duo to bigbands, in clubs, theatres,

festivals such as the North Sea Jazz Festival; throughout Europe.

I worked with well known producers in studios, singing leaders for TV.

It is richness: so many great musicians with whom I have the privelege

to work with and be inspired by.

I feel the absolute urge to sing and perform.

the audience, to experience the music together:

that’s what I call the SOULSILLY Xperience!

After graduating from the Conservatory of Amsterdam I was invited to

The Conservatory has since then developed into an international school:

Since 2012 I also became coördinator of the vocal department.

I also taught Pop-singing for 4 years at the Conservatory

of Haarlem and absolutely loved it!

Over the years I’ve led workshops and given masterclasses in Holland, Belgium,

Jazz and Pop for vocalists as well as for bands.

The questions I always ask myself and therefor my students :

What is your true passion in a song,  in your voice, in playing with your fellow musicians,

and how do you share that passion with your audience.

My album ‘In the palm of my hand’ was from my contemporary Jazz period of writing:

released in ’95. Lyrics, not so much about romantic love but more about personal insights.

The music was adventurous and intellectual and full of energy.

In 2010 I released my second album ‘the SOULSILLY Xperience’.

With Rembrandt Frerichs on keys and Hammond, Phaedra Kwant -basses,

On this album all my original compositions are a mix of Soul and Jazz.

My newest songs, you can hear on the upcoming album, are the mix of

Soul and Folk: Songs from the soul.

Since the beginning of 2019 the combination Music and Painting as a new performance form is taking shape. 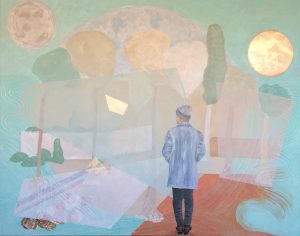 Daarnaast coacht zij talenten from all over the world